Off we go again

Having pretty much abandoned the allotment over the winter, we've been back in the last few weeks, and it's been pleasingly quick to get it all back in shape. Nat and Jeremy spent a while getting the surface weeds off the soil and then they and Nat's dad set to with the rotavator and cleared the 2nd and 3rd beds very nicely. All in all, it took about three visits to get just about two fully clear beds. 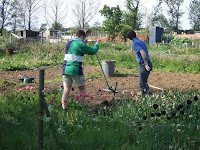 The next step is, of course, to fill those beds with plants! Here's Nat and Jeremy planting out the potatoes last week. As far as we can remember, we've got Majestic, Red Duke of York and Charlotte this year. We got fewer seed potatoes than last year, as they're hard work to plant out and keep earthing up. The Majestic ones are yet to be planted; they're still chitting in the kitchen. 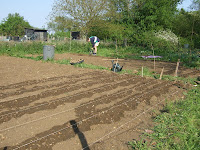 We've also planted (in the foreground) three rows of parsnips, 2 1/2 rows of onion sets and (behind) two short rows of mangetout.

In May, I think the plan is to direct sow sweetcorn, more mangetout and some climbing French beans (but I haven't got my notes on me).

Finally, we have two courgettes and four squashes sprouting nicely on the windowsill in the kitchen to planting out later in the year. Let's hope some of it pays off!
Posted by M-A and N on 5/02/2011 04:51:00 pm

Good to see you guys back! Looks like the plot is well one track too, look forward to seeing it come on as the summer goes... :)